Over 30 years of milestones, magic, mayhem and memories

“Directing a group of improvisers is like holding the reins of a multi-headed joyful beast. At the sniff of a fresh idea, they launch themselves into the unknown. Sometimes you can steer them but usually you just hold on and enjoy the incredible ride.

When Theatresports first came to Sydney in 1985, there was a buzz around town: the newly-opened Belvoir St Theatre had a cult, sell-out Sunday night show. It was a style of performing called ‘impro’ – which at the time sounded like something impossible from another planet. “There’s no script?”… “What do they do?”… “I can’t believe it!” Everyone in the Sydney theatre scene was either in the audience or on stage ‘improvising’. 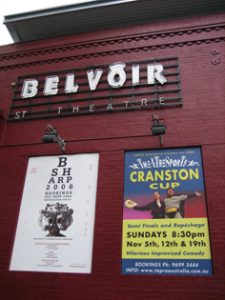 Belvoir St Theatresports quickly exploded into an annual program of shows, an ABC TV series, spin-off theatre shows and International tournaments, as a new wave of brilliant improvisers came of age. In the 90s, it became an independent company, Theatresports Inc, and then in 2000, it morphed into the current, artist-run entity, Impro Australia. Thirty odd years later, the impro(v) scene has evolved and matured, embracing a wide range of exciting styles and forms. Over the years, so many incredible people have been involved, many of them becoming household names.

In the 1990s and 2000s tens of thousands of players took our courses and workshops and theatresports shows sprang up all over the city. From the Harold Park Hotel to the Comedy Store, The Arthouse Hotel to the Bridge Hotel in Balmain. We’ve done themed shows including PULP, Parliamentary Theatresports and Mixed Doubles Tennis to Impro Vasion, EspressoSports and the Comedy Improlympiad in 2000 at Belvoir. There have been Royal Rumbles, TudorSports, The Impranos and just about every other improvised format and genre you can imagine. Each season, every performance had one thing in common. Dedicated performers taking a risk and making everything up as they went along. 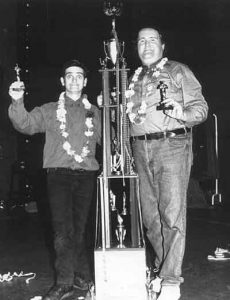 Today Impro Australia produces epic Enmore Theatre shows, courses in a range of Improvisational styles, the Theatresports in Schools Program, Corporate Events and Training, our Indigenous Theatresports Youth program and much more. What started as a creation of Keith Johnstone, an Englishman living in Canada, and has since become a truly Australian theatre tradition.